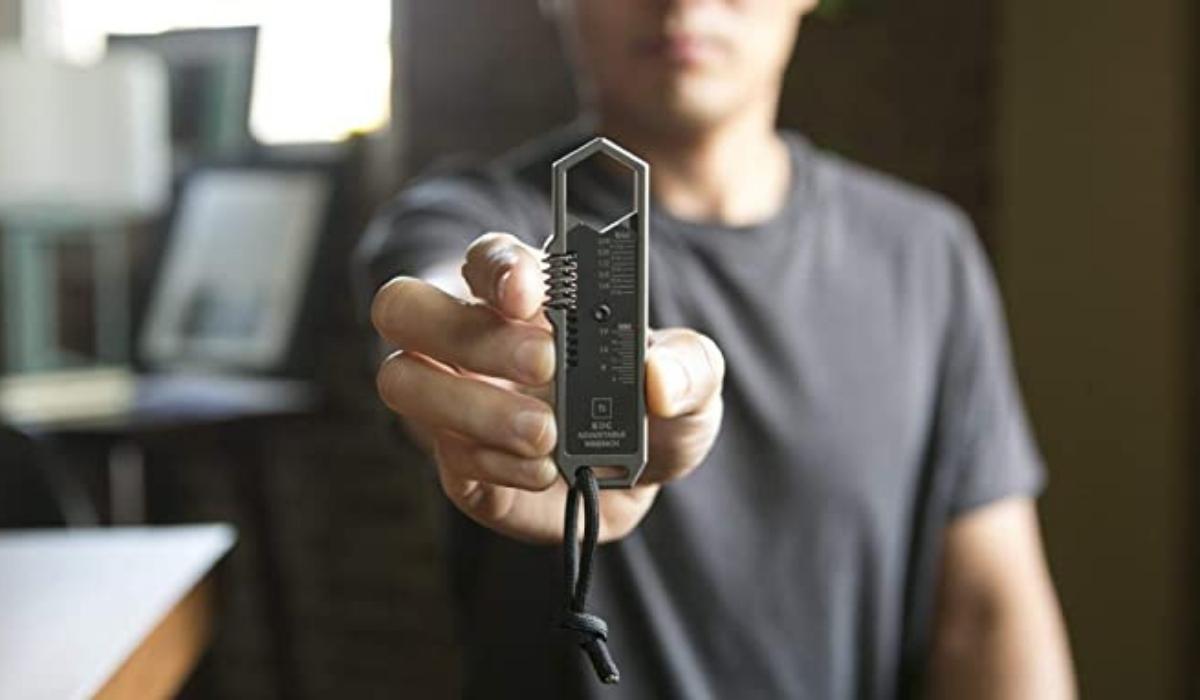 When it comes to anything that has been scaled down, the general consensus is that it’s gonna pack a lesser punch in comparison to its full-sized counterpart. This is the case regardless of the subject matter.

On the other hand, the days of giving more importance to appearance than practicality are long gone. And now, companies are making serious efforts to develop smaller versions of gadgets that are truly useful for day-to-day life tasks and activities.

10 Pocket Gadgets You Can Buy

Some of these amazing devices are, in point of fact, even better than any full-size things that you could possibly purchase.

So, from the astonishingly versatile Masterkey to the ground-breaking Figment VR, here are 10 of the most cutting-edge pocket gadgets that you absolutely need to get your hands on.

You’ll be able to bring the things that have only existed in your head into the real world if you get your hands on this bad boy. Now, rather than being a singular device in and of itself, it is more of a technology that is powering movies, games, and other fantastic digital experiences.

So for instance, you could strap into your cardboard cutout headset and dive into an amazingly immersive CGI World like for example, Harry Potter’s Wizarding World.

Other than that they’ve got fully fleshed-out Opera experiences or even the Great Lego Race. Seriously. It’s like having access to an unending treasure trove of other worlds that you may explore using your smartphone or VR headset.

Do you remember pocket watches? You probably wouldn’t, unless you were born in the 19th century, but guess what? They’re back, and this time around they’re smart.

Runcible is a smart pocket watch that fits all the functionality of a smartphone into a circular disk. However, it gets better as it has a sophisticated wooden body, inside of which there is a powerful Snapdragon CPU, a 7-megapixel Camera, WiFi, Bluetooth, and a whole bunch of other stuff in addition to that.

Also, the ultra-thin bezel touchscreen is something that is certain to attract a lot of attention. However, it is not entirely aesthetic at the expense of functionality, as anyone can create apps for it.

You can take pictures, record videos, surf the web, get directions, and do pretty much everything else that your smartphone is capable of doing, all while wearing this teeny-tiny watch.

Oh, and considering that it was developed by a group of people who had previously worked for Apple, you can be sure that it will have a very high-end feel.

The Masterkey sounds like it could be something that is used to open doors, just based on its name alone. Actually, Masterkey 4.0 is the solution to all your workspace-related problems.

You won’t believe it, but this is a pocket PC that has everything you could possibly need to start working. For example, the gadget shoots out a laser keyboard and projects a 120-inch screen onto the wall, and it also connects to the internet.

Oh, and make sure you don’t confuse it with any other ordinary projectors because this one packs a serious punch. It is important not to overlook the fact that the Masterkey 4.0 is of a size that allows it to be carried in your wallet, which makes all these features seem even more amazing.

You probably believe that a gadget such as this costs like a thousand dollars, right? Get ready to be shocked, because the price of the Masterkey 4.0 is in fact lower than that of the majority of laptops

Has it ever occurred to you that you look at yourself in the mirror and think, “Hey, I look really good today,” but then you take a selfie on your phone, and it looks completely different than what you just saw in the mirror?

Well, what if we told you that there’s a gadget that captures you just the way you’re genuinely supposed to look? In a nutshell, the Mirrex Smart Personal Mirror is the device of your dreams.

Not only does it capture pictures of you from the best angle, but also does it while illuminating your face. Because it fits easily into a pocket, this device is extremely portable, so you can carry it with you basically anywhere.

You could even do your makeup in the back of a super dark car with the help of the front LED light. Oh, and did I mention that you can also use it as a wireless charger? All you have to do is place your phone on top of it and watch it charge.

Zippo is a well-known brand name that makes high-quality cigarette lighters. You’d be astonished to learn how many other great things they’ve dabbled into since their early days, including the Hand Warmer.

You might be wondering, though, aren’t gloves supposed to be hand warmers? Yeah, but while you’re wearing them, you won’t be able to do much of anything.

On the other hand, if you have this, you will be able to keep your hands warm for more than 12 hours even if it’s snowing outside. Additionally, the burning mechanism is quite simple to activate.

All you have to do is hold it in your hand, kind of like you hold your phone or anything else. The wonderful thing about it is that you may fidget with it while keeping your hands warm in the bleak and cold winters.

You’ve probably heard of wristbands that monitor your fitness statistics or those that athletes use to absorb sweat.

What would you do, though, if you actually had an additional pocket on your wrist? Those who go jogging probably know how tricky it is to stash your keys, cash, and other small items on you, especially when you are wearing athletic shorts that have no pockets.

With Pocketbands, you don’t have to come up with a botched job of a solution like stuffing cash inside socks; instead, you can just store all the necessary items directly into your wristband.

The band itself has a very understated appearance, so it’s unlikely that most people will even know it’s there. Oh, and the very best thing is that it is available in a huge variety of colors and materials to match your personal taste, including one that glows in the dark.

Okay, so picture a washing machine for a moment.  You likely have in your mind the image of a large device with a circular loading door on the front, right?

What if we told you that there are actual washing machines on the market that you can quite literally carry around in your pockets? How would you react? Yes, we are aware that it appears to be too good to be true, but WASHWOW is literally that.

These are tiny cubicle washing devices that you can carry around and use to clean your clothes without the need for any detergent at all. You can use it anywhere, just put it in a sink along with a lot of water, place your dirty laundry next to it, and then wait for it to do its thing.

Oh, and it does a lot more than simply clean your laundry; it has a sterilization rate of 99.9%, and in addition to that, it eliminates all odors as well as any harmful chemical residue from your clothes.

Let’s face it: nobody enjoys being outdoors during the hottest days of Summer. You get all sweaty.  Also, let’s not even talk about the stains that will inevitably appear on your clothes after some time in the sun.

However, with Polar Seal Gemm, you will have access to your own own personal body cooler that will keep the heat at bay for over 7 hours. This fantastic gadget may reduce your body temperature by as much as 10 degrees, which is a significant amount for such a small device.

Also, if you’re out there in the bitter cold, this Polar Seal Gemm can warm you up as well. Simply put it around your neck, plug in the battery, and voila! You’re instantly warm and cozy.

When it comes to measuring things, the majority of people are still using traditional rulers, and if you’re one of them, then it’s time to dump those ancient things and embrace the real future.

The Digital Rolling Rulers made by Rollova are not only convenient enough to fit in a pocket, but they also provide pinpoint accuracy.

Because this gadget can measure everything from flat surfaces to curved things, you won’t have to deal with the inconvenience of carrying an additional bendy ruler for round stuff. Instead, you can just use this one.

In addition, its little OLED display shines brightly, operates effectively, and also is very helpful. If you’re afraid about breaking it or something, you don’t need to be because the Rolling Ruler has a body made entirely of stainless steel, so there’s nothing to worry about.  Therefore, even if you toss it against a wall, it won’t break at all.

When it comes to working on machinery, there is no substitute for a good old screwdriver. Having said that, the portable ones that you can purchase on the market aren’t very good because you need to have a solid grip.

Big Idea seems to have solved the problem as their Pocket EDC Driver is not only small but also multifunctional. First of all, it is made completely out of grade five titanium, which gives it an extremely high level of durability and makes it almost impossible to break.

In addition to that, its entire body is rather small. While we’re talking about pockets, you’ll also get a small clip that attaches straight to your pants.

It also has a mini tool head that you can use to tackle probably any screw you could imagine, and if you’re worried about torque, it ensures that you don’t break anything while you’re screwing things in.

Pocket gadgets make life so much easier! I’m sure in this list you’ve found some gadget that interests you.

Which of these portable devices do you now think you would find most handy in your daily life? Let us know what you think in the comments section below!